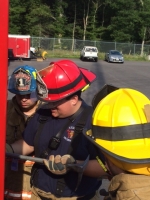 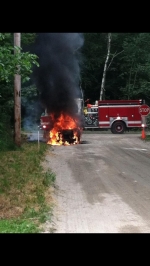 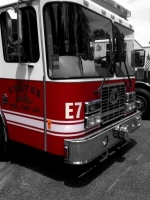 Saint Florian is known today as the patron saint of firefighting. In life he was a General in the Roman army in charge of many men as well as organizing fire brigades. Saint Florian was well liked and even admired by the hierarchy of Roman government who saw him as a great problem solver.

The high praises and accolades from the Roman government could not save Saint Florian from his faith. He was ordered to murder and remove all of the Christians from his area. As a devout Christian himself Saint Florian refused saying that he would rather endure the fate of his fellow Christians. Saint Florian was beaten and burned at the stake. Still alive, he was then thrown into the river with a stole around his neck.

Saint Florian is known as the patron saint of firefighting because of his incredible resistance to death when he was set a blaze.

The history of the Maltese cross goes as far back as 1113 A.D when a brave group of crusaders known as the Knights of St. John, battled the Saracens for possession of the holy land, these brave crusaders encountered a new weapon unknown to European warriors. It was a simple, but a horrible device of war, it wrought excruciating pain and death upon the brave fighters for the cross. The Saracen's weapon was, fire.

As the Knights band together they were forced to fight the flames of their attackers. It was during this intense fire fight that the courage of our Firefighting ancestors was demonstrated. The Knights banded together, risked life and limb for their Brothers and fought the flames, and saved many fellow Knights. The Knights were later recognized for their bravery during the epic battle located on the Island of Malta.

As a result of their courageous acts, the Island of Malta was given to the brave knights. The symbol on their flag, the eight-point cross, became known as the Maltese Cross.

Dalmatians in the Fire Service

During the period of horse drawn fire apparatus the Dalmatian’s duties and loyalty insured them a place in the fire service history.  The Dalmatian served multiple rolls in the fire service.  At the station they would root out the rats, protect the men, horses and equipment from vandals, vagrants and thieves, and be a loyal companion to men and horse.  On fire calls they would run with the horse teams to ward off people and dogs from their path.  Once on the scene the Dalmatians role was that of guard dog and would keep the horses calm and ward off any unwanted dogs and insure that nothing was stolen from the apparatus.

Today the Dalmatian is considered the firefighters’ companion and the traditional mascot of the fire service.  Dalmatians can be found in firehouses around the world, continuing to serve as a guard dog and companion to the firefighters and equipment that adopted them centuries before.  Their aristocratic good looks, low maintenance, high energy, unrelenting loyalty and bravery suit them well for the fire service.  Dalmatians can still be seen riding fire apparatus as they respond to fire calls.

Copyright © 2006-2021. YourFirstDue Inc. All Rights Reserved. Designated trademarks and brands are the property of their respective owners. Content on this web site is supplied by Exeter Volunteer Fire Department No.1. YourFirstDue Inc. cannot be held responsible or liable for any content, text, pictures, or any other media found on this web site. Maintained by the members and staff of Exeter Volunteer Fire Department No.1.
Management Login
Powered by